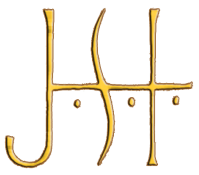 In 1975 Erv Wilson and I decided to collaborate in the construction of a clavichord using one of his generalized keyboard designs carried out to 19 tones per octave.  I eventually built three.

Just a word about Erv Wilson....  He likes to describe himself as being born in 1928 of religious exiles in Chihuahua, Mexico and raised in a rich multi-cultural environment which affected his perception of, and subsequent search for, an understanding of tonality and music.  It wasn’t until he moved to the US when he was 15 that he began to get some answers to his first and abiding fascination — the music of India — and subsequently the mathematical and theoretical language to understand tonality in terms of ratios, the harmonic series, etc.  Through Helmholtz’s “Sensations of Tone” he was exposed to the work of R.H.M. Bosanquet, a 19th century theorist who had set forth designs for a ‘generalized’ keyboard.  For Erv, there was no looking back.  He started to apply all manner of scales and tonal arrangements to his own version of Bosanquet's keyboard.

It was in the mid 1970’s, while I was studying sitar and Indian Classical music with Amiya Dasgupta, that I met Erv through some articles he had written for 'Xenharmonicon'.  Being an instrument maker with a bias toward the clavichord and deeply involved with the study of sitar and raga, our meeting (naturally) led to the building of a clavichord with expanded intonation.

Though this instrument is undeniably unique, there are two things not particularly original:
1) - it is a clavichord, and
2) - the generalized keyboard.

Erv, like Bosanquet 100 years before, does not believe the generalized keyboard is something new — novel and ingenious, yes — but not new .  Though he has made brilliant changes that distinguish him from Bosanquet, he echoes the thought that the logic of its form is inherent in the mathematical organization of tone and tonality, and its shadow can be seen all though the history of that study.
The clavichord has been around for most of the last millennium, and draws its pedigree from the monochord of 1000 years before that.  The clavichord has a very harmonically rich sound, but because of its peculiar mechanism - producing tone without plucking or striking the string - it is extremely quiet.
Listening to a clavichord being played is not unlike eavesdropping on someone talking to himself.
For hundreds of years, the “clav” has established itself as a certain kind of instrument - an archetype of introspection.  Public performance was not feasible; the idea of such, silly - you would no sooner have a clavichord 'concert' than you’d invite a crowd to come and watch you think!

What is particularly unique and original about this instrument is that it is a clavichord with a generalized keyboard.  Something of a paradox - making an unique statement both musically and philosophically.
An archaic, private, traditional, eminently acoustic instrument - and an innovative, avant garde, sophisticated keyboard - in one instrument.
The generalized keyboard takes us out of the tonal compromise of 12-to-an-octave, provides us with expanded tonal resources to explore, and a form on which to structure our mathematical models of scales and tuning.
The clavichord, an ancient, private instrument, fosters expressiveness, subtlety, and musical finesse.

Though it may mean different things to different people, for me, this instrument transcends historical context and cultural contrivance. 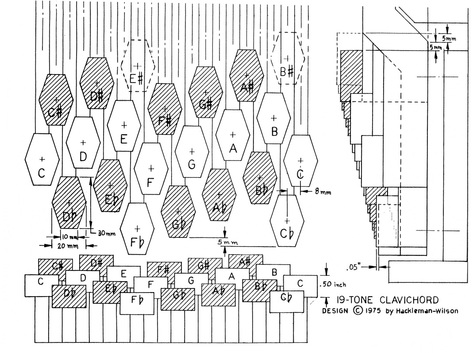 A “modern” clavichord has, more often than not, meant an amplified clavichord.  But for me, “modern” means “vital,” and “vital” doesn’t mean “louder.”  This vitality has to do with wonder, inquisitiveness,
experience, and understanding - just the kind of “modern” fostered by an inquiry into tonality itself, with expanded intonation as one of its tools.

I am the builder of this instrument, and as such, an expert in that.  To all else I am a perenial student, and as such, in a continual state of exploration and discovery.  I am not a keyboard virtuoso, musicologist, or mathematician, so I can’t defend every idiosyncrasy of fingering between Erv Wilson's generalized keyboard and a conventional keyboard, elaborate all the historic precedent for this project, nor propound and explain the elegant proportions and subtle mathematical theory that underlies the building of scales and enharmonic music, but this is what I’m discovering:
This keyboard is meant to meet your hand, and reflect the natural contour of the fingers, rather than being in a straight line - the octave is 6” and the spacing of the diatonic is much the same as what we are used to, so much of what was already learned on a conventional keyboard can be translated to the learning on this one. The other intriguing aspect of Erv's generalized keyboard is as a tool or physical model in depicting the spatial relationships of intervals.  Much like a shape can represent a molecule, so too this keyboard literally is a model of the ratios and proportions that the scales are actually constructed of.

It wasn’t until fairly late in the European tradition that the twelve-tone keyboard was settled on - perhaps out of convenience, necessity or compromise.  Until that time, there was much experimentation going on with the task in hand of better representing the actual intonation of either various enharmonic systems, or of the popular Mean Tone system which, though tempered, allowed for pleasing, pure thirds (something you would think important in a music comprised of triads!), fifths and sixths.  All of these systems, and ways of understanding tone and tuning, lead to actual pitches of much more than 12 to an octave.  Mean Tone was beautiful, but only in 6 major keys and 3 minor keys.  What if,  when it was found that Mean Tone was in tune in only a limited number of keys, instead of reducing the scope of tuning to accommodate a keyboard (to 12), they had instead expanded the keyboard to accommodate the tuning?? A nineteen tone keyboard tuned in the same Mean Tone yields 15 major keys in tune and 12 minor keys in tune.

The clavichord is a delicate, archaic, ethereal, profoundly acoustic instrument. There is a dynamic relationship between musician and instrument - a Zen-like involvement with the constant process of tuning - as well as playing.

It is from all these perspectives that I’ve come to call it a “philosopher’s instrument.”  We have an instrument where we can experience the sensation of music through the physical act of playing it, and through the nature of the keyboard, speculate on the construct of tonality and tuning at the same time.

Like a philosophical idealist with his feet planted firmly and squarely in the sky, so too, this instrument sits squarely as neither in the past nor of the future, of this culture or of that, of this tradition or of that - it exists in a paradoxical position free of all, yet drawing its breath from all, serving as an inspiration to the introspective musician and the inquisitive mathematician alike.